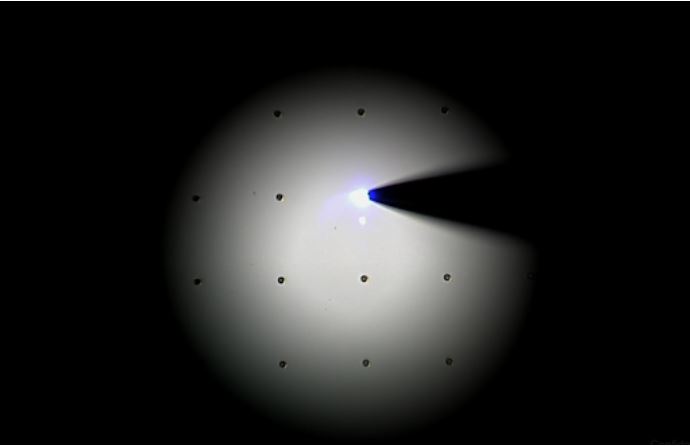 “Does it turn on?!” An introduction to micro-LED testing

If I told you my job was to test LEDs, what would you think of?

If you’re like me, you might imagine sitting in a lab surrounded by bits of wires and circuits, pressing buttons, turning on lights, and writing down numbers.

Which is not wrong, but there’s a bit more to it than that.

When I first started working at VueReal, I was an “Optical Test Specialist”.  In this blog post I’ll go over some of the things I learned in my first few months on the job.

First, some context: VueReal is in the business of manufacturing microLEDs.  MicroLEDs are essentially the same as normal LEDs, except that they are much smaller.  When you make LEDs really small their characteristics change.  While larger LEDs are common, microLEDs are still being researched.  MicroLEDs are thought to be the future of display technology, making transparent displays and AR/VR more practical.

Being on the test team, pretty often we’d get asked “so...does it turn on?”.  Which is first and foremost, why we test - to see if the microLEDs work.  As in any research, our work has a few different stages. The first stage of any idea is development and finding out if it works. It takes weeks of work to make microLEDs based on a new idea, and more often than not only a few of them turn on.  Welcome to research.

If they do work, then there’s a bunch of other things we can test to characterize the LEDs.  If you’re into electronics, you might be familiar with datasheets.  A datasheet basically lists all of the relevant information about a device.  For commercial LEDs, the datasheet often includes stuff like:

Another metric we really care about is efficiency, especially external quantum efficiency (EQE).  EQE is just the ratio of light we get out for the amount of current we put in.

As you can imagine, information like this is useful if you’re designing a display.  It tells our designer how much current and voltage to supply, how bright the LEDs will be, and what colours they’ll be.

It’s also really important for improving the LEDs - it provides insight into how they work.  EQE in particular is the metric we use to compare microLED designs - better microLEDs have higher EQE.

In technologies that are in later stages, we also investigate the reliability, repeatability, and yield in more detail.

How do we test LEDs?

Let’s delve into how we actually turn on those LEDs, and measure stuff like IV and EQE.

To measure the IV curves, we use a source-measure unit (SMU).  The SMU lets us specify exactly how much current or voltage to supply.  It can also simultaneously measure the actual current and voltage.  Using software we can set up sweeps - a sequence of points for the SMU to source/measure.

Usually we connect the LEDs to the SMU using probes.  Probes are just sharp metal tips - sharp so that they are small enough to match the dimensions of the LEDs.  Using a microscope, and probe positioners with micrometer precision, we can guide the probes to a specific LED.

To measure the optical properties, we use a spectrophotometer, connected to a fixture that collects the light.  Different fixtures measure different things.

“Spectrophotometer” is a fancy word for a machine that measures spectrums.  A spectrum is a plot of light vs wavelength.  What a spectrometer does is split incoming light into individual wavelengths, the same way a prism splits white light into colours.  The “photometer” part of it contains a detector to measure the intensity at each wavelength, and special calibration to convert the measured intensity into absolute units.  I.e. It can tell us our green LED emits 0.5 W of power, at a wavelength of 565nm.

Inside the sphere, light from the LED bounces around so many times, it’s impossible to tell which direction it’s coming from.  Kind of like an echo chamber for light.  A known fraction of the light ends up going to the spectrometer.  The total optical power is calculated from this fraction.  From the total power, and source current, we can calculate the EQE.  Using this method we can also measure luminance-current (LI) curves.

Unlike say, lasers, LEDs can emit light in all directions (hence the sphere!).  In fact, how much light it emits in each direction is called the angular distribution, or radiation pattern.  To measure this, we use another fancy sounding instrument called a goniophotometer, which also connects to the spectrometer.  All it does is rotate the sample in multiple directions.  A small detector in the goniometer captures the light at each position, and the software puts all the measurements together to make a 3D profile of the light intensity.

These are just some of the tests that are possible.  Part of being on the test team is setting up new tests, when we need them.  For example, I once spent a whole day probing microLEDs on a hotplate, to measure how temperature affects light output. 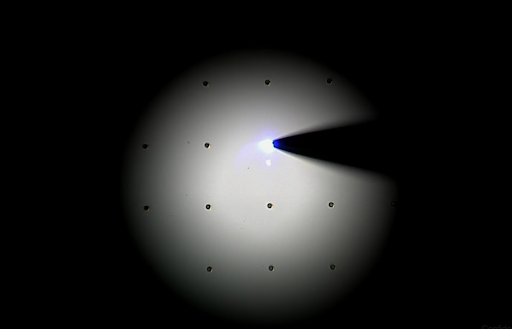 Pictured above: A printed 10 micrometer LED

What does this have to do with microLEDs?

If you’re familiar with testing, you’d know that everything I described applies to regular LEDs too.  So how are microLEDs different?

For one, microLEDs are pushing the limits of the test equipment.  Because they’re smaller, they naturally emit less light, so the detectors need to have less noise.  They require less current, so the SMUs have to be more sensitive.  Motorized stages need to be more precise.  Cameras for visual inspection need to have higher resolution.

Second, VueReal is developing microLEDs for displays.  We are producing cartridges of microLEDs, and we need a fast, simple way to check which LEDs on which cartridges work, before putting them in displays.  Hence, the precision systems team is developing an automated inspection system.  The goal is to be able to turn on thousands of microLEDs at once, and check the voltage, colour, and number of defects in an instant.

All of this is what makes testing microLEDs interesting.  Having a front row seat to ground breaking new LED designs, and facing the challenge of finding new, better ways to evaluate them.

Why did you join VueReal and what still excites you?